Plant of the Day is: Cocos nucifera or Coconut

Plant of the Day is: Cocos nucifera or Coconut

What with it being the winter solstice today and all, perhaps we could all use a nice reminder that the days are going to be getting longer again :). 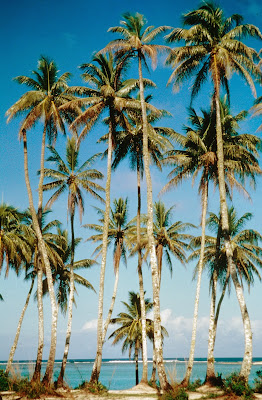 So my boss and some other co-workers alike love to ask extremely specific and interesting questions.  Just the other day it was "where is the embryo in a coconut?"  Of course we all had to look it up, and I was very impressed with the development of a coconut.  Here is the inside of a coconut. 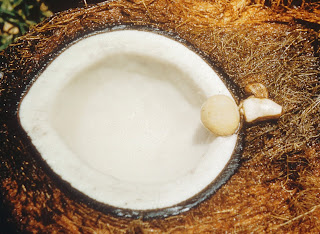 To the right side of the image is the embryo.  In this picture, germination is occurring.  Now, what happens here is the cotyledon develops inside the area where the coconut water is and actually absorbs the water for energy.  As this is happening, the first shoot and root emerge from that hole in a coconut.

Here is another illustration of the seed. 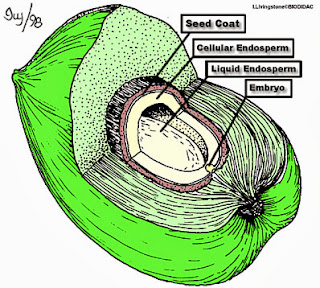 As you can see, the liquid and surrounding tissue are actually endosperm (think of it as starting charge for a seed).  So, there are the first baby steps of a coconut.  Now, on to the other stuffs.

So, some of you may know that Coconuts are a member of the palm family (Arecaceae).  That family is actually the only member of its order, which is kind of nifty.  The coconut tree is also not a tree, none of the palms are actually trees as they are monocots.  I won't get into a whole lot of detail, but they don't have what is called "secondary growth" and as such are not trees.  Do they have exceptionally lignified tissues, sure, but no cork cambium for sure (often they have syringyl lignins).  Palm trees actually increase their diameter by division and enlargement of parenchyma cells which is termed "diffuse secondary growth".  It's neat.  Really.  I promise.

I'm not going to get into all the uses of coconut, you know a lot of them.  Drink it, eat it, make fiber out of it.  It's commonly used as a growth media for marijuana.  The vast usage of the plant is quite amazing.

As far as ID goes, it is a monocot, so it has straight veins in the leaves that usually fan out.  There ARE two different groups of palms, the ones that are more upright with a fan at the top and ones that tend to form a kind of shrub and branch out near the base of the plant.  The true flowers are 3 (a monocot trait) and these occur in a fairly large inflorescence which houses separate male and female flowers (monoecious).  It is believed to be cross pollinating but may self (I'm not going down that insane road right now).  The female flowers are a fair bit larger, so look for that.

As a last note, Cocos nucifera is the only species for the genus Cocos.  Which makes it???....
Monotypic.  A monotypic genus.

Have some coconut over the holidays and think of a warm beach :).